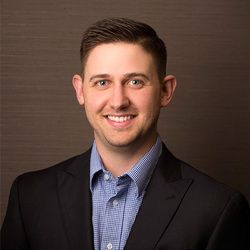 Jayden D Gray is an Associate Attorney at Younker Hyde Macfarlane, where he practices in the area of tort litigation.  His experience includes representing clients in matters involving medical malpractice, personal injury, and wrongful death.  Jayden skillfully advocates for injured patients in pre-litigation hearings, depositions, and drafting motions and pleadings.

• Admitted to Utah State Bar and United States District Court for the District of Utah, 2016

Marijuana and the Workplace: How High are the Stakes for Employees?, Utah OnLaw: The Utah Law Review Online Supplement: Vol. 2017 : No. 1, Article 2

They were extremely knowledgeable, extremely helpful experts. The team helped me with all aspects of my case, including medical and financial, and understood that it affected more than me but also my family.