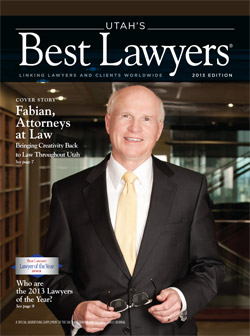 Norman J. Younker has been named one of the best medical malpractice attorneys in Utah in the 2013 edition of The Best Lawyers in America, the nation’s premier referral guide to the legal profession. Mr. Younker is one of only eleven medical malpractice attorneys in the state to be included in the list, which is compiled according to votes of legal professionals.

When evaluating nominees, voting attorneys are asked to consider whether they would refer a close friend or relative to a given nominee if they were unable to handle the case, themselves. Voters are expected to be highly discerning, holding nominees to the highest possible professional and ethical standards. Mr. Younker’s inclusion on the final list reflects the high esteem in which he is held by his fellow lawyers.

The attorneys of Younker Hyde Macfarlane, PLLC, founded in 1919 by two World War I veterans, were featured in the cover story of the 2013 edition of Utah’s Best Lawyers, which is excerpted from The Best Lawyers in America. In addition to Mr. Younker, thirteen lawyers from the law firm were named to the Best Lawyers list across a variety of practice areas including tax, product liability, and corporate law.

Before he began representing medical malpractice victims as a plaintiff’s attorney, Mr. Younker devoted seven years of his career to defending hospitals and medical professionals against claims of medical malpractice. Upon realizing that many patients had legitimate claims, he decided to channel his passion for medical malpractice law into serving victims and their families. He currently sits on the board of governors for the Utah Association for Justice, an organization of which he is also past-president.

Aside from being an integral part of the Younker Hyde Macfarlane, PLLC collective of attorneys, Mr. Younker is the founder and author of PatientInjury.com®, an online resource for victims of medical malpractice. His inclusion in the list of The Best Lawyers in America represents one of several accolades in Mr. Younker’s career, as he is also perennially included in the Top 100 Trial Lawyers, Mountain States Super Lawyers, and Utah Legal Elite.

Mr. Younker can be reached at: