Sepsis by Perforated Bowel By Younker Hyde Macfarlane on August 15, 2016

The team at Younker Hyde Macfarlane has significant experience with cases involving sepsis. More specifically, sepsis caused by a bowel perforation or tear. Sepsis can be life-threatening and is caused when chemicals released into the bloodstream to fight infections trigger inflammatory responses. Sepsis, if not treated early, can damage multiple organs and lead to septic shock, which may lead to death.  Physicians must be vigilant in watching for and responding to signs of sepsis, particularly following abdominal surgery.

Sepsis is caused by many things, such as pneumonia, influenza, kidney infections, urinary tract infections, and other conditions. The chances of sepsis are increased in those who are over the age of 65, those who have weakened immune systems, and those who have drug-resistant bacteria (typically seen in patients who were prescribed antibiotics over and over again). Many sepsis cases we see, however, are those where a patient undergoes abdominal surgery and the bowel is perforated, but goes unnoticed by the surgeon. Fecal matter then spills out into the abdomen causing peritonitis which leads to sepsis. 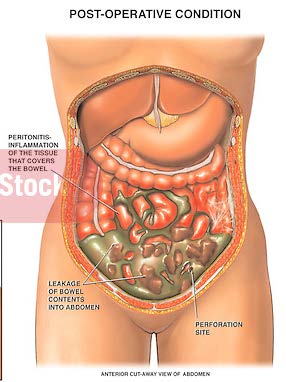 Often, patients will not know they have a perforated bowel until symptoms are sever. Early signs of sepsis are:

The following symptoms appear once Sepsis progresses into a severe stage:

Diagnosing and Repairing a Bowel Perforation

Because the longer a perforation goes undiagnosed, the higher the risk of the patient going into septic shock, it is critical that an enterotomy be timely identified.  Physicians should be watching for signs of sepsis and order CT imaging to confirm the presence of a perforation.

While those who suffer from mild sepsis and are treated quickly will most likely recover fully and go on to live a healthy life, others are not so fortunate. Those who have suffered severe sepsis or septic shock, and lived, they typically go on to have long-term effects. These effects all together are referred to as “post-sepsis syndrome” and include:

How an Attorney Can Help You

Given the severity of injuries caused by sepsis and potential long-term effects, it is important to contact an attorney quickly if you or a loved one has suffered from sepsis caused by a perforated bowel. The attorneys at Younker Hyde Macfarlane will assist you in evaluating and prosecuting all valid claims you may have.

For more information about your legal options related to sepsis caused by perforated bowel, please contact our team of medical malpractice attorneys today. The legal team at Younker Hyde Macfarlane will fight diligently for you and your legal needs.